Perhaps one did not want to be loved so much as to be understood.

Doublethink means the power of holding two contradictory beliefs in one's mind simultaneously, and accepting both of them. 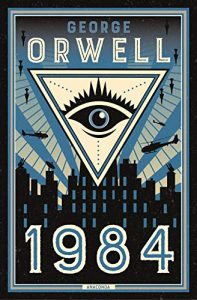 What is the book about?

Written in the 1940’s it imagines a future world in 1984 controlled by an unseen power – big brother, where individuals are subordinated to the supposed good of greater society. In reality it is for the benefit of ‘the party and big Brother.’

The book traces the subversive activities of certain rebellious members who rail against the oppressive rule and omnipotent power of Big Brother.

What was good about it?

With echoes of Animal Farm the book forms a powerful critique of Soviet Union communism. It shows how the ardent socialist Orwell comes to revile the exploitation of the money for the benefit of the few.

As a confirmed ‘Orwellaphile” I am not worthy to object to anything in 1984. However, I can truly declare that I have yet to dislike any of Orwell’s writing.

Did it bring something positive to you?

Originally read more than 50 years ago when 1984 was a distant exciting prospect, this book inspired me to objectively examine absolutist regimes of Communist and Fascist dictatorships – the reality of Stalinist terror. It led me to read many other Orwell writing such as “The road to Wigan pier” “Down and out in Paris and London” and “The clergyman’s daughter”

Having had 50 years of life to reflect and having lived through 1984 itself my conclusion is that for all its failings democracy remains the best structure to achieve and exercise freedom.

Would you recommend it to others? Why?

Yes absolutely, for all the above reasons and simply because the book is an excellent read.

What is the book about?

The struggles of the principal character, Winston Smith, who experiences trying to exist under the totalitarian regime of “Big brother,” an entity able to exert total power and control over everyone. Smith’s simplistic view is that all of society is becoming dystopian to a point where simple existence cannot be allowed to be enjoyed and anything pleasurable is offending. It’s a tale of man fighting against the machine, with limited success. It’s a warning for how our world could degenerate and distort to a point that the very core beliefs of society as we know it, cease to exist.

What was good about it?

It has to be borne in mind that Orwell wrote this book in 1949, only 4 years after the end of the Second World War and that at that time, it was set in a distorted future that was considered wildly fantastical.

Now, sadly a lot of Orwell’s predictions are very close to the impositions time has led us to accept as “normal.” As a piece of societal commentary it’s proved to be as prophetic as it is a superbly entertaining piece of fiction.

There is nothing not to like about such a brilliant book.

Did it bring something positive to you?

I first read this book as a young teenager in the 1970’s, a time when the world was very different than it is now. It was a real eye opener then and made me view the environment very differently (and not always positively!) Until I read it, I had been very unaware of and naïve to how much government and authority attempted to shape our lives to their whim.

As my life has changed (entering work, marriage, becoming a parent, middle age etc.) I have often re read it and each time it really made me think about where the world is going, how our lives are changing, and how we are losing our sense of simple satisfaction and individuality.

I wrote my AS Level 15,000 word thesis on how the attitudes and events in this book and Orwell’s other masterpiece “Animal Farm” reflected society’s mistakes and I wish I could compare what I feared then with what I have experienced subsequently!

Would you recommend it to others? Why?

Without any hesitation. Not questioning the judgement of those that compiled the  “100 novels” list its one of the few that I would encourage everyone to read